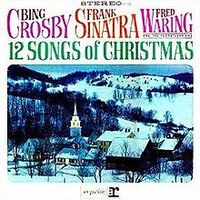 12 Songs of Christmas is a 1964 holiday-themed studio album by Frank Sinatra and Bing Crosby. It is Sinatra's forty-third studio album.

Along with Bing Crosby, Sinatra performed the songs with Fred Waring with his orchestra.

There were two different A/B singles released for 12 Songs of Christmas. The first of which featured the songs "I Heard the Bells on Christmas Day" and "The Little Drummer Boy," whereas the second featured "We Wish You the Merriest" and "Go Tell It On the Mountain."[1]