A Man Alone: The Words and Music of McKuen 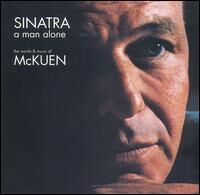 A Man Alone: The Words and Music of McKuen (commonly seen as simply "A Man Alone") is a 1969 studio album by American singer Frank Sinatra. It was Sinatra's fifty-seventh studio album.

Arranged by Don Costa, all the songs featured in A Man Alone were written by poet, Rod McKuen.

One single was released for A Man Alone. The title track of the album was released as a single along with the album's "Love's Been Good to Me." The latter track peaked #75 on the singles charts.[1]

Allmusic claimed the album to be, "as it stands, an intriguing listen, but ultimately a failure." The fact that "A Man Alone was intended to be a serious statement, but much of it comes off as embarrassing posturing" left the album to be even more so of a failure. The overall score A Man Alone received was a two out of five.[2]

Retrieved from "https://sinatra.fandom.com/wiki/A_Man_Alone:_The_Words_and_Music_of_McKuen?oldid=13658"
Community content is available under CC-BY-SA unless otherwise noted.