Frank Sinatra Wiki
Register
Don't have an account?
Sign In
Advertisement
in: Albums, A Swingin' Affair!, Albums released in 1956,
and 3 more 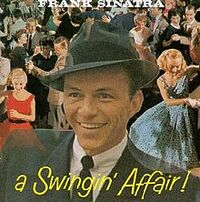 A Swingin' Affair! is Frank Sinatra's fourteenth studio album. Released in 1957, the tracks were arranged by Nelson Riddle for Capitol Records.

The song "No One Ever Tells You" was released as a B-side single of the single release for "To Love and Be Loved."[1]

Allmusic gave the album a perfect score of five out of five stars. In comparison to the previous year's Songs for Swingin' Lovers, Stephen Thomas Erlewine of Allmusic claimed that "A Swingin' Affair! is a forceful, brassy album -- it exudes a self-assured, confident aura."[2]

Rolling Stone gave the album a perfect score of five out of five stars as well.[3]