Frank Sinatra Wiki
Register
Don't have an account?
Sign In
Advertisement
in: Albums, All Alone, Albums released in 1962,
and 3 more 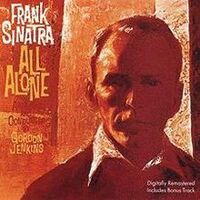 All Alone is a studio album by Frank Sinatra that was released in the October of 1962. It is Sinatra's thirty-fourth studio album.

Though not featured in the album or CD re-releases of it, the songs "The Look of Love" and "I Left My Heart in San Francisco" were recorded during the recordings for All Alone. In addition to this A/B side single, a second single featuring "The Look of Love" was released in 1962, this one featuring the song "Indiscreet."[1]

All Alone received a poor score of two and a half out of five stars from Allmusic. All Music's Stephen Thomas Erlewine claims "Sinatra doesn't strictly follow Jenkins' intentions" though "the results are quite moving, especially on the opening and closing Irving Berlin ballads, "All Alone" and "The Song Is Ended.""[2]