Frank Sinatra Wiki
Register
Don't have an account?
Sign In
Advertisement
in: Albums, America, I Hear You Singing, Albums released in 1964,
and 2 more

America, I Hear You Singing(album)

Edit
watch 01:36
We're Getting Mutants in the MCU - The Loop
Do you like this video?
Play Sound
America, I Hear You Singing 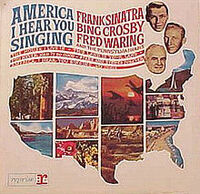 America, I Hear You Singing is an album released in 1964 that featured not only Frank Sinatra, but also Bing Crosby and Fred Waring and his Singers. It is Sinatra's forty-first studio album.

The album's production was started due to Sinatra's friend and political associate John F. Kennedy being assassinated during his years in the Presidency. The album follows a theme of talking about the beauty of the United States of America.

All tracks feature Fred Waring and the Pennsylvanians

Allmusic gave the album a low score of only two and a half stars out of five. Stephen Thomas Erlewine of Allmusic claimed that "the album isn't an engaging, suffering from hackneyed arrangements and dull songs."[1]