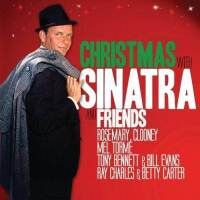 Christmas with Sinatra & Friends is a holiday-themed compilation album by Frank Sinatra. The album charts songs from 12 Songs of Christmas and A Jolly Christmas from Frank Sinatra, but also adds in songs performed by various artists.

As the name suggests, various songs from the album aren't actually performed by Sinatra, rather his "friends" instead. Ray Charles and Betty Carter performed "Baby, It's Cold Outside." Mel Tormé performed his famous holiday song, "The Christmas Song (Chestnuts Roasting on an Open Fire)." Bill Evans and Tony Bennett performed the song "A Child is Born." Rosemary Clooney was the one who performed "White Christmas."