Come Dance With Me! 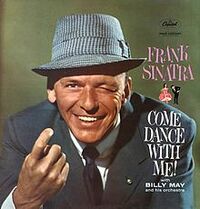 Come Dance with Me! is Frank Sinatra's twenty-first studio album. The album was released initially in 1959 for Capitol Records. It was Sinatra's second recording with arranger, Billy May.

Peaking at #2 on the Pop charts and remaining on the board for 140 weeks, Come Dance With Me! remains to be Sinatra's most successful album.

Though not featured in the original LP's track listing, the song "Same Old Song and Dance" was released as a single along with the song "Monique," a song from Kings Go Forth. In addition, the songs "Nothing In Common" and "How are Ya Fixed for Love?" were featured as a single together.[1]

Allmusic praised the album, calling it Sinatra's "hardest swing album ever." Stephen Thomas Erlewine of Allmusic also stated that "the album has a fair share of slower numbers, but the songs that make the biggest impression are the up-tempo cuts."[2]

Come Dance with Me! won three Grammy awards at the 1959 Grammy ceremonies. Sinatra himself took the awards for "Best Male Pop Voice Performance" as well as "Album of the Year" because of this album. Billy May, the album's arranger, took a third award in the category of "Best Arrangement Accompanying a Vocalist or Instrumentalist."[4]

Sinatra also won another award during the 1959 ceremony, but not because of Come Dance with Me! directly. Sinatra was awarded a special award in the category of "Artists & Repertoire Contribution."[5]

Retrieved from "https://sinatra.fandom.com/wiki/Come_Dance_With_Me!?oldid=14786"
Community content is available under CC-BY-SA unless otherwise noted.