Frank Sinatra Wiki
Register
Don't have an account?
Sign In
Advertisement
in: Albums, Come Swing with Me!, Albums released in 1961,
and 3 more

Come Swing with Me!

Edit
Come Swing with Me! 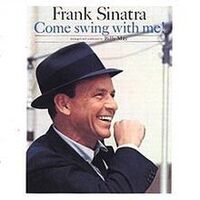 Several songs from Come Swing with Me! were released as singles. 1961 brought two songs from the album, "American Beauty Rose" and "Sentimental Journey," to the charts and these songs were released together as an A/B side single. In 1962, "Five Minutes More" was released as a B-side single with the song "I'll Remember April." "Five Minutes More" was later released along with the song "I Love Paris;" this was Sinatra's final single to be released under Capitol Records.[1]

Stephen Thomas Erlewine of Allmusic claims that Come Swing with Me! lies "somewhere between the carefree Come Fly with Me and the hard-swinging Come Dance with Me!." Though "Sinatra was also recording I Remember Tommy for Reprise and his affections were with his new label," Erlewine insists that this "intense, speedy energy gives the album an edge that distinguishes the record."[2]