Frank Sinatra Wiki
Register
Don't have an account?
Sign In
Advertisement
in: Albums, Cycles, Albums released in 1968,
and 3 more 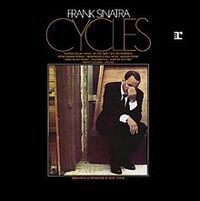 Cycles is a 1968 studio album of Frank Sinatra. It is Sinatra's fifty-fifth studio album.

The album was arranged and conducted by Don Costa.

Three songs featured in Cycles were released as singles. The title track and "My Way of Life" were released together in 1968. In 1969, Sinatra's rendition of "Rain in My Heart" was released as the third and final single, featuring the song "Star!."[1]

Allmusic gave Cycles a low score of two out of five stars mostly because of its "material associated with folk-rock." In addition, Stephen Thomas Erlewine of Allmusic claims that "some of the material isn't well-suited for Sinatra" or that "there simply isn't enough variety to sustain interest."[2]