Frank Sinatra Wiki
Register
Don't have an account?
Sign In
Advertisement
in: Albums, Francis A. & Edward K., Albums released in 1968,
and 3 more 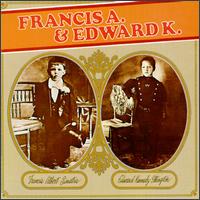 Francis A. & Edward K. is a 1968 studio album by Frank Sinatra; it is Sinatra's fifty-third studio album. Sinatra performed this album with Duke Ellington and his big band. The album was arranged and conducted by Billy May.

Allmusic scored the album at two and half stars, claiming the much-anticipated collaboration with the jazz giants "didn't quite match its high expectations." The album's performanced between Sinatra and Ellington were uneven, "varying between robust, expressive performances and thin singing."[1]