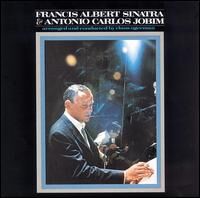 This album is known for having some of Sinatra's few bossa nova style songs, featuring new compositions of "Change Partners", "I Concentrate on You", and "Baubles, Bangles and Beads". Sinatra and Jobim later released a sequel album to this one, and titled it "Sinatra-Jobim", however it was taken off the shelves shortly following its release.

Allmusic gave the album a score of four and a half out of five star score. Allmusic praised the album, claiming it be "a subdued, quiet album that used the Latin rhythms as a foundation, not as a focal point. Supported by a relaxed, sympathetic arrangement of muted brass, simmering percussion, soft strings, and Jobim's lilting guitar, Sinatra turns in an especially noteworthy performance; he has never sounded so subtle, underplaying every line he delivers and showcasing vocal techniques that he never had displayed before."[1]

Francis Albert Sinatra & Antonio Carlos Jobim peaked at #19 on the Billboard 200 charts as well as peaked at #4 on the Jazz Album charts of 1967.[2]