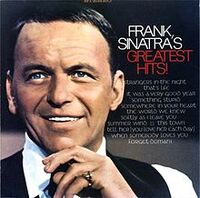 Not to be confused with the Columbia compilation Frank Sinatra Sings His Greatest Hits.

The album features a variety of hits from his 1960s career, including songs from Strangers in the Night, The World We Knew, and September of My Years.

Retrieved from "https://sinatra.fandom.com/wiki/Frank_Sinatra%27s_Greatest_Hits?oldid=14651"
Community content is available under CC-BY-SA unless otherwise noted.