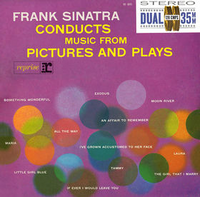 Including albums in which Sinatra served as the conductor, Frank Sinatra Conducts Music from Pictures and Plays is Sinatra's thirty-sixth studio album.

This album is also notable in that it is Sinatra's only collaboration with arranger Harry Sukman for a studio album of Sinatra's.