Edit
watch 01:36
We're Getting Mutants in the MCU - The Loop
Do you like this video?
Play Sound
Frank Sinatra Conducts Tone Poems of Color 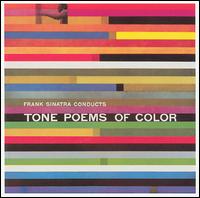 A total of eight swing era composers were chosen for this album: Victor Young, Gordon Jenkins, Billy May, Jeff Alexander, Alec Wilder, Nelson Riddle, Elmer Bernstein, and André Previn. This album's tracks were tone poems written by the aforementioned composers. This was the first work that Sinatra actually conducted; it is also his first collaboration with Gordon Jenkins.

This album didn't make it well with the public and had a somewhat poor reception. It's only re-release is in the compilation box set, Concepts.