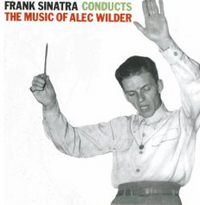 Frank Sinatra Conducts the Music of Alec Wilder is an album that Frank Sinatra recorded under Columbia Records in 1939 through 1945. Chronologically, it is the second studio album released by Frank Sinatra.

The album features Sinatra conducting an orchestra to the music of, as the title suggests, Alec Wilder. Conducts the Music of Alec Wilder was initially released under Columbia in 1946[2] but has been followed by multiple releases in 1976 and 1995.[3]

Frank Sinatra Conducts the Music of Alec Wilder is Sinatra's first hand at conducting music. One arbitrary note about this album, is that regardless of Sinatra not able to read sheet music[4] and having never conducted before, Sinatra aspired to learn how to play this music. Sinatra, in his beginnings as a singer, enjoyed listening to the songs of Alec Wilder while hanging around backstage at clubs or theatres, and eventually decided that that would be the basis for his initial conducting album.

All songs initially composed and written by Alec Wilder.

Richard S. Ginell of Allmusic enjoyed the album. Ginell claimed that Sinatra's "baton technique was no worse than those of most of the great arrangers he employed," and that the selections of the album "are lovely, wistful pieces that fall in between the cracks of classical music." The album scored a four out of five stars.[1]

Community content is available under CC-BY-SA unless otherwise noted.