Frank Sinatra Wiki
Register
Don't have an account?
Sign In
Advertisement
in: Albums, I Remember Tommy..., Albums released in 1961,
and 3 more

Edit
watch 01:36
We're Getting Mutants in the MCU - The Loop
Do you like this video?
Play Sound
I Remember Tommy... 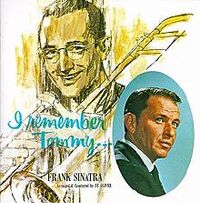 I Remember Tommy... is an album by Frank Sinatra, released in 1961; it was Sinatra's thirtieth studio album.

I Remember Tommy was meant to be a tribute to the famous bandleader, Tommy Dorsey, whom Sinatra had a standing career with in the 1940s. The tracks of the album had been performed by Sinatra before with Dorsey, and had Sy Oliver, a fellow Dorsey collaborator, arrange the new renditions of the songs.

Throughout 1961, all of the songs from I Remember Tommy... charted and were released as five respective A/B side singles. The first of these releases was of "I'll Be Seeing You" and "The One I Love (Belongs to Somebody Else)." Later came "Imagination" and "It's Always You." The third of these releases was one of "I'm Getting Sentimental Over You" and "East of the Sun (and West of the Moon)," and fourth was of "Without a Song" and "It Started All Over Again." The final single from the album featured "Take Me" and "Daybreak."[1]

I Remember Tommy received moderate and average reviews, though never saw any reviews at the height of the charts. Allmusic for example, rated the album a 3 out of 5 stars, claiming "the new versions pale in comparison to the originals."[2]

I Remember Tommy peaked #3 on The Billboard 200 charts.