Edit
watch 01:36
We're Getting Mutants in the MCU - The Loop
Do you like this video?
Play Sound
It Might as Well Be Swing 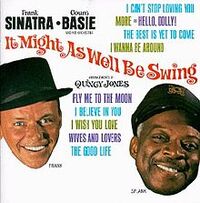 This album features one of Sinatra's most famous songs, "Fly Me to the Moon (In Other Words)". Sinatra's rendition of "Hello Dolly!" features a unique tribute verse to Louis Armstrong, the jazz trumpeter who charted this hit in early 1964. This album also features Sinatra's cover of the Tony Bennett song "The Best is Yet to Come," which become a concert favorite for Sinatra as well as the last song Sinatra played in a live performance.

Allmusic claimed that the album was the superior album to Sinatra-Basie, saying that the two "play with energy and vigor" whereas in Sinatra-Basie, they sound "worn out." The album scored a three and a half out of five stars.[1]