Frank Sinatra Wiki
Register
Don't have an account?
Sign In
Advertisement
in: Albums, L.A. Is My Lady, Albums released in 1984,
and 3 more 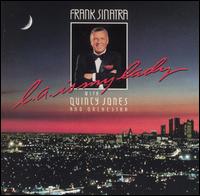 L.A. Is My Lady is an album of Frank Sinatra, released in 1984 for Qwest Records. This was Sinatra's sixty-fifth and final solo studio album.

Being for Qwest, L.A Is My Lady's tracks, as well as three further unreleased tracks, were featured in Sinatra's compilation set containing all of the tracks he performed during the Reprise years, The Complete Reprise Studio Recordings.

Allmusic rated the album a two out of five stars. The album's failures were pinned on "Jones' overly ambitious and commercial production." However, to those who worked on the album, Stephen Thomas Erlewine stated "everyone involved, from Sinatra and Jones to the band themselves, sounds like they're having fun, and that sense of joy effortlessly translates to the listener."[2]