Frank Sinatra Wiki
Register
Don't have an account?
Sign In
Advertisement
in: Albums, Moonlight Sinatra, Albums released in 1966,
and 3 more 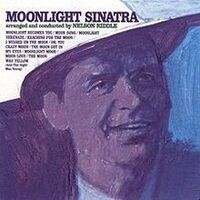 The tracks in this album, all centered around the moon, were arranged and conducted by Nelson Riddle and his orchestra.

Only one song from Moonlight Sinatra was released as a single. The track "Oh, You Crazy Moon" was released along with Sinatra's 1966 Strangers in the Night's title track.[1]