Frank Sinatra Wiki
Register
Don't have an account?
Sign In
Advertisement
in: Albums, My Way, Albums released in 1969,
and 3 more 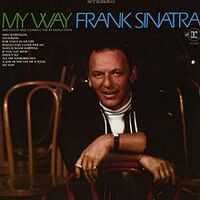 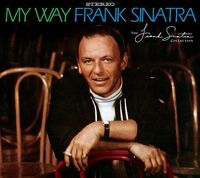 My Way, released in 1969, is a studio album Frank Sinatra released under Reprise Records. My Way is Sinatra's fifty-sixth studio album.

The album, arranged by Don Costa, features some of the time's most famous hits such as "Watch What Happens", "For Once in My Life", "Yesterday", and the title song, "My Way". "My Way" later became one of Sinatra's concert staples and became a pseudo theme song for Sinatra.

In 2009, a 40th anniversary version of the album was released; this special edition included two live performances made by Sinatra: one of "For Once in My Life" and the other of "My Way."

The only single to be released for My Way was its title track, which was released with the song "Blue Lace."[1]

Allmusic thought that My Way had a "more varied selection of material and a more focused, gutsy performance from Frank Sinatra" than the previous year's Cycles. They also claimed that My Way was "successful in creating a middle ground between the traditional pop Sinatra loves and the contemporary pop/rock that dominated the charts in the late 60s." Allmusic's review scored My Way at three out of five stars.[2]

Mojo magazine scored the album in its 194th, January 2010 issue. Here, My Way also scored a three out of five stars.[3]