Frank Sinatra Wiki
Register
Don't have an account?
Sign In
Advertisement
in: Albums, No One Cares, Albums released in 1959,
and 3 more

Edit
No One Cares 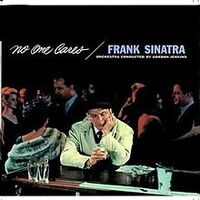 No One Cares is the twenty-third studio album of Frank Sinatra; the tracks were arranged by Gordon Jenkins. The album was released in 1959 under Capitol Records.

Allmusic stated that the only flaw with No One Cares and its "brooding, lonely songs" was the lack of "grandiose melancholy of Only the Lonely." However, Allmusic's Stephen Thomas Erlewine stated that "in its slow, bluesly tempos and heartbreaking little flourishes, it is every bit moving."[2]