Frank Sinatra Wiki
Register
Don't have an account?
Sign In
Advertisement
in: Albums, Ol' Blue Eyes Is Back, Albums released in 1973,
and 3 more

Ol' Blue Eyes Is Back

Edit
Ol' Blue Eyes Is Back 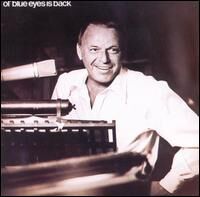 Ol' Blue Eyes Is Back is a 1973 studio album by Frank Sinatra; it is Sinatra's sixtieth studio album. The name of the album is named as it is because Sinatra recorded this album right after returning from his brief retirement.

The two Ol' Blue Eyes Is Back singles were released in 1973. The first of the two featured "Let Me Try Again" and "Send in the Clowns," whereas the second A/B side single featured "You Will be My Music" and "Winners." In 1976, "Send in the Clowns" was later re-released as a single, this time featuring the song "I Love My Wife."[1]

Allmusic gave the album a low score of merely two out of five stars. Stephen Thomas Erlewine of Allmusic claimed that "most of the songs wind up making a small impression, if they make one at all" and "much of the material is unmemorable, featuring slight melodies and clichéd, underdeveloped lyrics."[2]