Frank Sinatra Wiki
Register
Don't have an account?
Sign In
Advertisement
in: Albums, Point of No Return, Albums released in 1962,
and 3 more

Point of No Return

Edit
Point of No Return 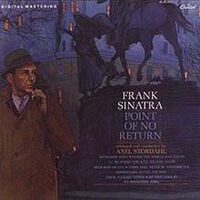 Point of No Return is the final studio album Frank Sinatra recorded for Capitol Records. It is his twenty-seventh studio album. Released in 1962, Sinatra had already begun his recordings for his self-founded recording label, Reprise.

Sinatra, to fulfill his contract, only took a two-day session in September 1961 to record and finish up his work at Capitol with this album.

Allmusic gave the album an average score of three out of five stars. Stephen Thomas Erlewine of Allmusic recalled on the album saying "though the Voice gave a more heartfelt, dedicated performance than expected, the project was rushed along, necessitating the use of a ghost-arranger, Heine Beau, for several tracks." The central issue with Point of No Return is the standing argument that "Sinatra was no longer interested in giving his record label first-rate material, preferring to save that for his new label, Reprise."[2]