Frank Sinatra Wiki
Register
Don't have an account?
Sign In
Advertisement
in: Albums, Ring-a-Ding-Ding!, Albums released in 1961,
and 3 more 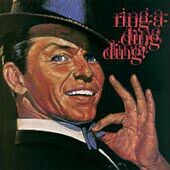 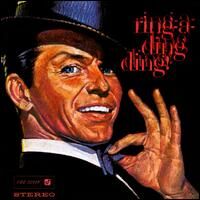 Chronology
Previous
Point of No Return
Next
Swing Along with Me

Ring-a-Ding-Ding! is a studio album released by Frank Sinatra in 1961.[5] The album was Sinatra's first under Reprise Records, and his twenty-eighth studio album overall.

Sinatra recorded Ring-a-Ding-Ding! throughout the winter of 1960. Sinatra and the album's arranger, Johnny Mandel, recorded all of the twelve initial tracks and several others throughout three days of December, the 19th, 20th, and 21st. All of the tracks were recorded in Los Angeles, California.

Ring-a-Ding-Ding! is Sinatra's first, and the first album ever, to be released for his self-founded record label, Reprise Records. The album features several re-recordings of some of Sinatra's songs from Capitol and Columbia such as "A Foggy Day (In London Town)" and "The Coffee Song" respectable. "Have You Met Miss Jones?" and "Zing! Went the Strings of My Heart" were originally recorded for this album, but were removed from the final release.

The album has been released multiple times, once in 1991, and again in 2011, both of which for the 30th and 50th anniversaries of the album respectively.

However, when the album was re-released again on June 7th, 2011, the bonus tracks were changed to:
"Zing! Went the Strings of My Heart" [Outtake Bonus Track] (James F. Hanley) – 3:00
"Have You Met Miss Jones?" [Previously Unreleased Outtake] (Richard Rodgers, Lorenz Hart) – 10:18