Frank Sinatra Wiki
Register
Don't have an account?
Sign In
Advertisement
in: Albums, September of My Years, Albums released in 1965,
and 4 more

September of My Years

Edit
watch 01:36
We're Getting Mutants in the MCU - The Loop
Do you like this video?
Play Sound
September of My Years 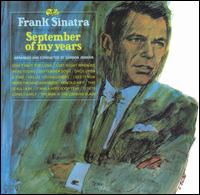 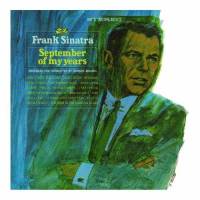 Chronology
Previous
Softly, as I Leave You
Next
My Kind of Broadway

September of My Years is a 1965 studio album by Frank Sinatra; it was arranged by Gordon Jenkins. The album was released as Sinatra's forty-fifth studio album.

Both September of My Years, and A Man and His Music, another 1965 album by Sinatra, won the Grammy Award for Album of the Year. This album brought some of Sinatra's best hits such as "The September of My Years", "This Is All I Ask", and one of his highest-rated songs, "It Was a Very Good Year". The latter of which won the Grammy Award for Best Vocal Performance, Male as well.

In 2010, the album was re-released with two bonus tracks: a live performance of "This Is All I Ask", and a higher quality version of "How Old Am I?".

Frank Sinatra recorded this album in four separate sessions after the long process of selecting the songs. The sessions caught the eyes of the press greatly and CBS went in with cameras to record Sinatra and his work in the studio with Jenkins' orchestra. The recording was to be done in originally only three sessions for this however in May, Sinatra was approached by his songwriting duo Sammy Cahn and Jimmy Van Heusen, to which they presented him with the album's future title track.

The idea behind September of My Years began when a now middle-aged Sinatra had an idea to make an album based on past loves. He called Gordon Jenkins and soon booked a few recording dates in April 1965. Sinatra was inspired by Jenkins' own "This Is All I Ask" and his own previous recordings of the standard "September Song."[7] The songs featured in the album focus on a story of a middle-aged man recalling past romances he has had in his long life. Inspired by the song, the album was initially to be named September Songs but in May of 1965, after being called upon when the project reached inception, Jimmy Van Heusen and Sammy Cahn wrote the song "The September of My Years" which became the lead track of the album, giving the album its final name.[6]

Allmusic gave September of My Years a perfect five out of five score. About Jenkin's arrangements, Allmusic complements them as "an appropriate reflective atmosphere" and "every cut fits into a loose theme of aging, reflection, and regret."[2]

September of My Years literally "cleaned out" at the 1965 Grammy Awards. Sinatra won the award for "Best Male Pop Vocal Performance" thanks to his rendition of "It Was a Very Good Year." Alongside, Sonny Burke, Sinatra took the award for Album of the Year as well.