Frank Sinatra Wiki
Register
Don't have an account?
Sign In
Advertisement
in: Albums, Sinatra's Sinatra, Albums released in 1963,
and 3 more

Edit
watch 01:36
We're Getting Mutants in the MCU - The Loop
Do you like this video?
Play Sound
Sinatra's Sinatra 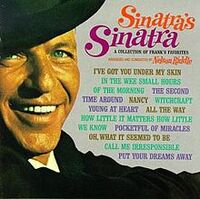 Sinatra's Sinatra is a 1963 studio album, under Reprise Records, by Frank Sinatra; it was Sinatra's thirty-ninth studio album.

This album contains twelve tracks, of which were some of Sinatra's personal favorites; the tracks had to be re-recorded for this album due to licensing issues with Columbia and Capitol Records respectively. The tracks were arranged by Nelson Riddle.

Sinatra Sinatra received mild reviews, mostly critized for its arrangements similar to that of Sinatra's original versions of most of the songs. Allmusic claimed that "it's entertaining, if inconsequential" toward the success of the album and its hits. Allmusic rated the album three out of five stars.[2]