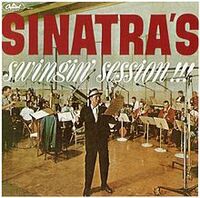 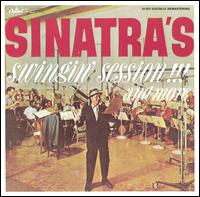 Swingin' Session focuses on a brash swinging style similar to Sinatra's 1957 album A Swingin' Affair! This album, however, features different orchestration and sped up performances. The original album clocks nearly twenty-five minutes making it one of Sinatra's shortest albums. The tracks of the album focus on songs Sinatra had familiarized himself with near the end of his Columbia career and other ballads from that time.

Its CD re-release was titled "Sinatra's Swingin' Session!!! And More." This reissue of the album featured three bonus tracks, "Sentimental Baby," "Hidden Persuasion," and "Ol' McDonald." The first two were ballad arrangements recorded in September following the recording sessions of the album and the last was a swinging arrangement of the classic nursery rhyme with updated lyrics.

Like most of Sinatra's previous Capitol records, the album was recorded at the Capitol Records Studios building in Hollywood, California. With Nelson Riddle arranging and conducting the tracks, Sinatra recorded the songs to be used in the album during four recording sessions during August and September of 1960.[3]

Each track in Swingin' Session follows the same rhythm, taking a classic ballad arrangement and Riddle's band swinging the song in a way never heard before. Only two songs clock out of the average two minutes, "Blue Moon" and "September in the Rain," which make for an opposite to some of Sinatra's shortest recordings of his Capitol career in songs like "You Do Something to Me" and "S'Posin."

The song "My Blue Heaven" was released along with the song "Sentimental Baby," a song recorded but not featured in the LP, as a single in 1961. Two other songs from the recording sessions, "Old MacDonald" and "You'll Always Be the One I Love," were released together as a single in 1960.[1]