Frank Sinatra Wiki
Register
Don't have an account?
Sign In
Advertisement
in: Albums, Sinatra & Company, Albums released in 1971,
and 3 more 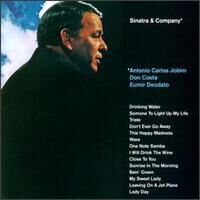 Sinatra & Company is an album by Frank Sinatra released in 1971. It is Sinatra's fifty-ninth studio album.

It was to be originally titled "Sinatra Jobim" as a follow-up to the 1967 album, Francis Albert Sinatra & Antonio Carlos Jobim.

Sinatra & Company is Frank Sinatra's final album before retiring from entertainment and performance. Sinatra later, in 1973, however came back to music with his Ol' Blue Eyes Is Back album.

Allmusic gave Sinatra & Company a score of three and a half out of five stars. In comparison to the charts of Francis Albert Sinatra & Antonio Carlos Jobin, Sinatra & Company's "charts are looser and more relaxed; consequently, the music is lighter, more immediate, and arguably more fun." About the arrangements of the album, the "second half of Sinatra & Company ranks as some of his best soft rock-influenced material of the late '60s." [1]

Mojo magazine gave the album a low score of two out of five stars.[3]