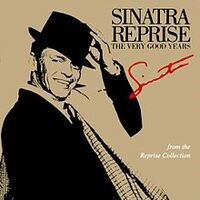 Sinatra Reprise: The Very Good Years is a 1991 single disc compilation of Frank Sinatra's work during the Reprise era of his career. The tracks were taken from the four disc box set, The Reprise Collection. The album takes its name from the song "It Was a Very Good Year" which Sinatra made popular in 1965, and is featured in this set.

Retrieved from "https://sinatra.fandom.com/wiki/Sinatra_Reprise:_The_Very_Good_Years?oldid=13840"
Community content is available under CC-BY-SA unless otherwise noted.