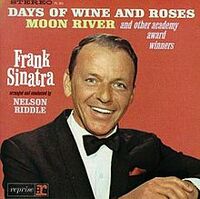 The overall focus of the songs are those that had won the Academy Award for Best Song. The album sports some of Sinatra's famous covers of songs such as "Moon River", "All the Way", and "The Way You Look Tonight". Sinatra also records new arrangements for previously recorded songs such as "The Continental" and "It Might as Well Be Spring."

Allmusic gave Academy Award Winners a three out of five star review. Allmusic claimed that the album was "charming and lively," but criticizes the album over how it "plays as a series of individual moments."[1]

Retrieved from "https://sinatra.fandom.com/wiki/Sinatra_Sings_Days_of_Wine_and_Roses,_Moon_River,_and_Other_Academy_Award_Winners?oldid=13642"
Community content is available under CC-BY-SA unless otherwise noted.