Edit
watch 01:36
We're Getting Mutants in the MCU - The Loop
Do you like this video?
Play Sound
Sinatra Sings Great Songs From Great Britain 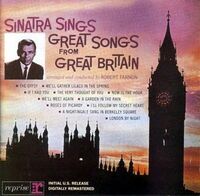 Sinatra Sings Great Songs From Great Britain is a 1962 Reprise album by Frank Sinatra. It is Sinatra's thirty-fifth studio album.

The tracks of the album all originated in Great Britain. In addition to originating in Britain, Sinatra recorded this album in Britain, however, these recordings were only released in Britain as an LP. This was Sinatra's only studio album recorded outside the United States.[3]

Sinatra Sings Great Songs from Great Britain was given below average reviews from publications such as Allmusic. Allmusic claims that the arragnements of the album "are more interesting than the actual songs" and "Sinatra was simply not in good shape for the sessions."[2]