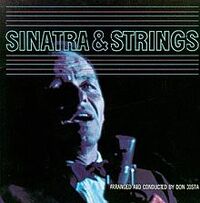 Sinatra and Strings is a 1962 album by Frank Sinatra;[3] it is Sinatra's thirty-first studio album. Sinatra's first album with arranger Don Costa, Sinatra and Strings was well-reviewed featuring entirely ballads and low-key songs such as "Stardust", "Night and Day", and "That's All".

Sinatra and Strings featured Sinatra's second rendition of "Stardust;" this version of the song was charted as a single along with the song "Come Rain or Come Shine."[1]

Allmusic praises Don Costa's luch arrangements on the album, however, claims that they are too similar to that of Sinatra's earlier Columbia recordings. Stephen Thomas Erlewine of Allmusicgave Sinatra and Strings a "three and a half out of five" stars.[2]

Retrieved from "https://sinatra.fandom.com/wiki/Sinatra_and_Strings?oldid=13634"
Community content is available under CC-BY-SA unless otherwise noted.