Frank Sinatra Wiki
Register
Don't have an account?
Sign In
Advertisement
in: Albums, Sinatra and Swingin' Brass, Albums released in 1962,
and 3 more 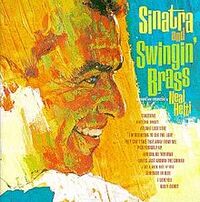 Sinatra and Swingin' Brass is a 1962 studio album of Frank Sinatra released under Reprise Records. It is Sinatra's thirty-third studio album.

Though not featured in the initial track listing, "Everybody's Twistin'" and "Nothing But the Best" were released as a single with each other.[1] A second single of "Goody Goody and "Love Is Just Around the Corner" was later featured as well.[1]

Sinatra and Swingin' Brass received mixed reviews. While receiving poor professional reviews from publications such as Allmusic[2], the album remains a fan favourite, featuring several covers of his Capitol work under Reprise.