Start a Wiki
Sing and Dance with Frank Sinatra 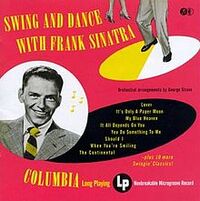 Sing and Dance with Frank Sinatra is Frank Sinatra's seventh studio album. The album was released under Columbia Records and was arranged by George Siravo. It was later renamed with the word "Swing" instead of the word "Sing".

A single song from the album, "My Blue Heaven," was released as a single. This single featured this song as well as "Goodnight, Irene" as played by Sinatra and The Mitch Miller Singers.[1]

Allmusic gave Sing and Dance a four out of five star review. Stephen Thomas Erlewine quotes Mitch Miller, claiming that the album was when "the world discovered that Sinatra could swing." The album was described as being "useful in illustrating that even when Sinatra wasn't at the peak of his stardom, he could record some extraordinary music."[2]

Retrieved from "https://sinatra.fandom.com/wiki/Sing_and_Dance_with_Frank_Sinatra?oldid=13612"
Community content is available under CC-BY-SA unless otherwise noted.