Softly, as I Leave You 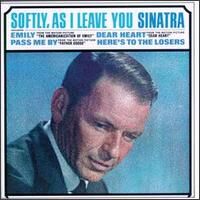 Softly, as I Leave You is a 1964 studio album by Frank Sinatra; it was his forty-fourth studio album. It was also Sinatra's first attempt at singing close to early rock and roll music

The first track of Softly as I Leave You was released in 1963, featuring "I Have Dreamed" and "Come Blow Your Horn," a song from the motion picture of the same name. The title track of the album, "Softly, as I Leave You," was released along with "Then Suddenly Love" as a single in 1964. The song "Available" was later released with "Anytime at All" in a 1965 single.[1]

Allmusic gave the album a three out of five stars. They praised the title track of the album, claiming it had a "subdued but forceful and steady backbeat." However, "the album is pieced together from leftovers from various early-'60s sessions" meaning it loses closure.[2]

Retrieved from "https://sinatra.fandom.com/wiki/Softly,_as_I_Leave_You_(album)?oldid=14440"
Community content is available under CC-BY-SA unless otherwise noted.