Frank Sinatra Wiki
Register
Don't have an account?
Sign In
Advertisement
in: Albums, Some Nice Things I’ve Missed, Albums released in 1974,
and 2 more 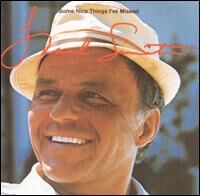 Some Nice Things I’ve Missed is a 1974 studio album by Frank Sinatra. It is Sinatra's sixty-first studio album.

Two singles were released in 1974 for Some Nice Things I've Missed. The first single featured the songs "Bad, Bad Leroy Brown" and "I'm Gonna Make It All The Way." A second single of "You Turned My World Around" and "Satisfy Me One More Time" was later released. Both of these singles peaked at #83 on the billboard charts.[1]

Allmusic gave the album a two out of five stars, criticizing the album's arranger, Don Costa and his arrangements being unfit for Sinatra. Stephen Thomas Erlewine stated that "the arrangements are forced and awkward" and "the slower numbers are more effective."[2]

Mojo magazine reviewed Some Nice Things I've Missed in its January issue of 2010. The review by Andrew Male rated the album at only one of five stars.[3]