Start a Wiki
Songs by Sinatra 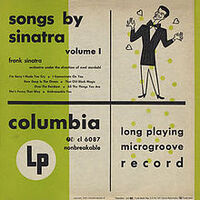 Songs by Sinatra is the third studio album of Frank Sinatra, following Sinatra's The Voice of Frank Sinatra and Music of Alec Wilder albums. Like most of Sinatra's work at Columbia, Axel Stordahl arranged and conducted the tracks.

Retrieved from "https://sinatra.fandom.com/wiki/Songs_by_Sinatra?oldid=13610"
Community content is available under CC-BY-SA unless otherwise noted.