Frank Sinatra Wiki
Register
Don't have an account?
Sign In
Advertisement
in: Albums, Albums released in 1961, Swing Along with Me,
and 4 more

Swing Along with Me

Edit
Swing Along with Me 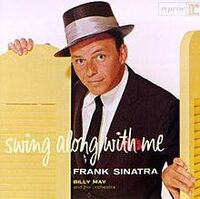 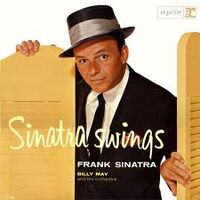 Swing Along with Me (retitled Sinatra Swings) is a 1961 studio album album; Frank Sinatra's second for his self-founded label, Reprise Records and his twenty-ninth studio album all together. The album was later renamed to be simply Sinatra Swings due to legal trouble with Capitol Records.

Sinatra's leave really weakened and angered Capitol Records. Caspitol then sued Reprise as the album's name was similar to one of Sinatra's last Capitol albums (one that was competing with it at that time) Come Swing with Me!. A court order was eventually granted, giving Capitol the right to change the name of the album. And so, Swing Along with Me, just Sinatra's second work with his label, Reprise, was to be renamed and reissued with the new name, "Sinatra Swings"[4]

In 1961, both "Granada" and "The Curse of an Aching Heart" were released as a single with each other. This was Sinatra's second single to be released under Reprise Records.[1]

Swing Along with Me was given mostly mixed reviews, criticized for its several similarities to Come Swing with Me. The album received a score of 3½ out of 5[2] by Allmusic.