Frank Sinatra Wiki
Register
Don't have an account?
Sign In
Advertisement
in: Albums, That's Life, Albums released in 1966,
and 3 more 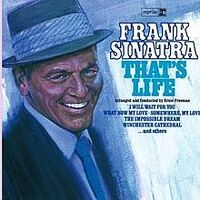 That's Life is a 1966 Reprise Records album performed by Frank Sinatra; it is Sinatra's fiftieth studio album. The album was conducted by Ernie Freeman.

The overall theme of the album starts off with the hit song, of which the album is titled, "That's Life". Other tracks in the album include such songs as "Winchester Cathedral" and "The Impossible Dream (The Quest)".

Allmusic gave the album a score of three out of five stars, criticizing the blues feel of the title track "wasn't attempted for the entire album."[2]