Frank Sinatra Wiki
Register
Don't have an account?
Sign In
Advertisement
in: Albums, The Concert Sinatra, Albums released in 1963,
and 3 more 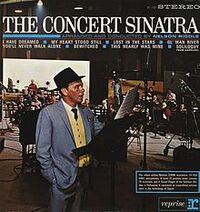 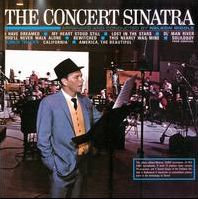 The Concert Sinatra is a 1963 studio album by Frank Sinatra released under Sinatra's Reprise label. The album is Sinatra's thirty-eighth studio album.

The album has been recognized as the point in which Sinatra's voice was at its peak. Nelson Riddle allegedly claimed this to be his favorite work with Reprise.

In 2012, The Concert Sinatra was reissued on compact disc under Concord Records. The only issue with the CD was the sound quality of the album was remixed and changed around. Charles Pignore, the producer of the CD release, claimed that the new release of the album gives a "you are there" feeling, however, the result of this mix is up to the listener of the album.

Concord's disc of the record features the original films that were located and restored for the production of this release.

The Concert Sinatra was released as an extended play for British release as well as the initial 35mm release. The smaller disc featured only four songs from the album, and was released only in European nations.

Allmusic gave The Concert Sinatra a favorable review, praising such songs as "Ol' Man River," "Bewitched, Bothered and Bewildered," and "Soliloquy." The album scored three and a half out of five stars.[1]

Mojo gave the album a four out of five star score in its January 2010 issue, featuring several Sinatra albums.[2]