Frank Sinatra Wiki
Register
Don't have an account?
Sign In
Advertisement
in: Albums, The World We Knew, Albums released in 1967,
and 4 more

The World We Knew

Edit
watch 01:36
We're Getting Mutants in the MCU - The Loop
Do you like this video?
Play Sound

The World We Knew 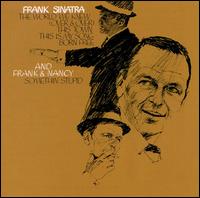 The World We Knew is a 1967 album by Frank Sinatra; it is Sinatra's fifty-second studio album. The album peaked #1 on the 1967 Adult Contemporary charts. Also, the second track of the album, a duet of Frank Sinatra with Sinata's daughter, Nancy, "Somethin' Stupid", peaked #1 on the singles charts for months.

The album, received good scores from the public in its singles, however, due to this, the album was criticized for being a "singles collection." The album was scored only two and a half stars out of five by Allmusic.[2]