Frank Sinatra Wiki
Register
Don't have an account?
Sign In
Advertisement
in: Albums, Trilogy: Past Present Future, Albums released in 1980,
and 5 more 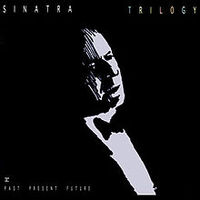 Trilogy: Past Present Future (simply referred to as Trilogy) is a 1980 studio album by Frank Sinatra. It is Sinatra's sixty-second studio album.

The album is known as Sinatra's last concept album, focusing on his career throughout the years. The first disc, titled "The Past", focused on standards similar to those he performed in late 50s and late 60s, while the second disc, titled "The Present", was riddled with pop hits Sinatra made throughout the Reprise years, inlcuding his final signature song, his rendition of the theme song from the film, "New York, New York". The final disc, "The Future" contained a few songs, all of which written by Gordon Jenkins, but most importantly, the three part, 13 minute song, "The Future".

Trilogy featured two different singles that were released during 1980. The first of these singles featured "Theme from New York, New York" and "That's What God Looks Like to Me." The song "You and Me (We Wanted It All)" was released along with the song "I've Been There!" for another single. "That's What God Looks Like to Me" was later re-released as a separate single featuring "To Love a Child." [1]

Allmusic rated the album at two out of five stars, claiming that the album had several flaws and inconsistencies. For the Past disc, Stephen Thomas Erlewine stated that this disc was riddled with "the material best suited for his [Sinatra's] talents." The Present disc is criticized by claiming that "the material is mediocre" though "Don Costa's arrangements are lovely, as is Sinatra's singing." In the words of the review, "The Future is an unqualified mess...Sinatra sounds lost singing clichéd, trite lyrics about peace, space travel, and his past."[2]

Trilogy: Past Present Future was awarded the Grammy Award for "Best Album Notes" at the 1980 Grammy ceremonies thanks to David McClintock.[4]

Community content is available under CC-BY-SA unless otherwise noted.