Frank Sinatra Wiki
Register
Don't have an account?
Sign In
Advertisement
in: Albums, Watertown, Albums released in 1970,
and 3 more 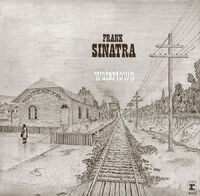 Watertown is the fifty-eighth studio album by Frank Sinatra. The album was released in 1970 for Reprise Records.

Watertown tells the story of a man from Watertown, New York whose wife, Elizabeth, leaves him and her young sons Michael and Peter behind to supposedly live with another man in a faraway big city. The songs make up a suite of scenes which take us from his disbelief of her leaving, to his discovery of how much he really loved her, to his despair that she is never, ever coming back. The original intent of the album project was to produce a movie along this premise, but it never materialized.

The album was an extensive and brilliant take for Sinatra on the rock-pop genre of the late 1960s. Watertown was arranged by Bob Gaudio, a member of the Four Seasons, with lyrics by Jake Holmes. It was one of the only times Sinatra did not record live with the orchestra; orchestral tracks were laid down in Manhattan and Sinatra overdubbed them a month later in Hollywood. The original LP featured a beautiful pen and ink illustrated gatefold, a departure from typical Sinatra album covers which did not include a photo of him. There was, however, a poster included with the album showing Frank in what might have been his Watertown movie role.[3]

In 1969, two different singles were released for the album. The songs "I Would be in Love (Anyway)" and "Watertown" were released together. Another single that featured "What's Now is Now" and "The Train."[1]

Allmusic praised the album, calling it Sinatra's "most explicit attempt at rock-oriented pop." Stephen Thomas Erlewine of Allmusic, in addition, claimed that "the culminating effect of the songs is an atmosphere of loneliness, but it is a loneliness without much hope or romance" and thus "he turns in a wonderful performance, drawing out every emotion from the lyrics." Allmusic scored the album at four and a half out of five stars.[2]

The album was released to mixed critical reviews and poor sales. Due to these sales, the album's initial live musical performance was cancelled, followed by Sinatra's temporary retirement near the end of 1971. In 1973, he reemerged with an award-winning, best-selling album, Ol' Blue Eyes Is Back.